My kids had counterfeit Pokémon cards in their collections. Do your kids have some too?

Until recently, all I knew about the Pokémon Trading Card Game was that my kids are obsessed with collecting and trading the cards, and that it seems like vast amounts of money (both theirs and mine) have gone into their collections.

But after their latest bout of begging for yet MORE cards, I decided it was time we learned how to play the actual game. To my surprise, I found the game to be super fun, strategic, and even educational -- it's a great way to strengthen reading and math skills!

But I found some of the cards in my kids' collections strange -- they were worth enormous amounts of points, which meant that when one of those cards was played, the opponent was out before the game had even really started! So I started searching for how to beat the high-point card that had come up during our game, figuring there had to be a secret I was missing.

To my astonishment, the secret turned out to be that the high-point card my son had played on me did not even exist in the official game. It was a fake! It wasn't the only one: It turned out their collections have been infiltrated with counterfeit cards!

Down the rabbit hole we went, researching fake Pokémon cards. We even examined their collections with magnifying glasses. We compared cards to each other and to online images. Now my two kids and I are experts at recognizing a fake Pokémon card.

I figured I'm probably not the only parent who had no idea that fake Pokémon cards are floating around, so I thought I'd share the secrets to spotting a phony card: 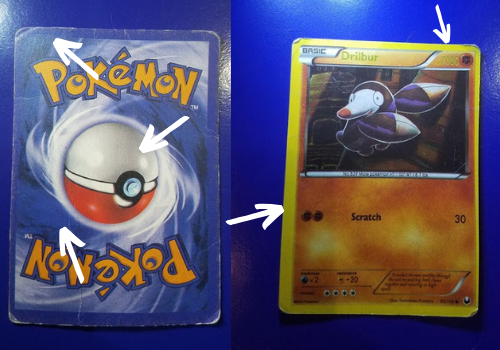 1. Easy-to-spot signs the card is a fake

Here are a few things to watch out for that are super easy to spot, once you know counterfeit cards are a phenomenon: 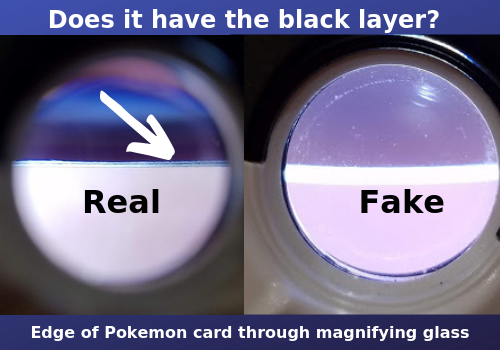 2. Does it have a black layer?

The most reliable method of distinguishing a genuine card from a fake card is that the real cards have a black layer sandwiched in between two white layers. This is because real cards are constructed with better materials to make them stiffer and less prone to wearing out. Sometimes you can see the black layer with your naked eye, but it's much easier with a magnifying glass, as the picture above shows. 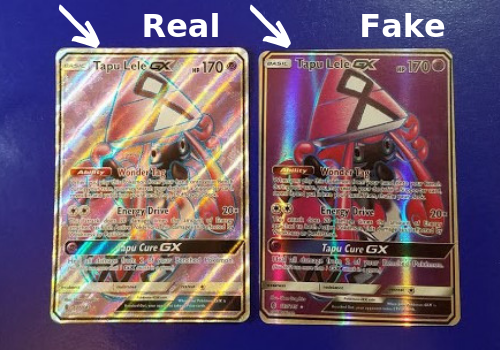 3. Is the card supposed to have texture?

It is still not clear to me which Pokémon cards are supposed to be textured. But this was a difference I noticed between some real full art GX cards and their fake counterparts. The genuine Tapu Lele GX card, for instance, was textured, while the fake one only had the shine. Also note that the fake one is printed with a tilt, making the edge inconsistent around the card. 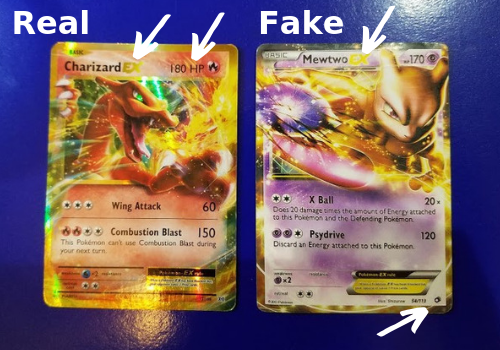 4. Is anything on the card misprinted or missing?

Fake cards may have misspellings, misprinted or blurry text, the wrong card number, or might be missing symbols. The Mewtwo EX card above, for instance, was really tricky for me to identify. But, the rarity symbol is missing (usually a circle, star, or diamond printed next to the card number) AND the card number is wrong. If you have a tough card, try looking it up in the official Pokémon Trading Card Database and compare it to the genuine card. I was suspicious of the Charizard EX card above because unlike most of our cards, it has the "HP" printed after the number. But, when I looked it up in the database, that is how it is supposed to be.

5. Are parts of the card not shiny when they are supposed to be shiny?

The "EX" in the real card above was iridescent, but in the fake card, the "EX" was not.

6. Get cards from reputable sources

If you are buying cards online, be wary of third-party sellers offering lots of rare cards for cheap. Stick to reputable sources. Even cards packaged as new might be fake! But by following these tips, you should be able to buy second-hand cards from local card shops and neighborhood marketplaces with confidence.

We could've been mad about our fake Pokémon cards, but learning how to spot them turned into a fun detective game for us -- just call us all Detective Pikachu! Hopefully, your kids will be excited (instead of disappointed!) if they find a few fake Pokémon cards in their collections too.

Want to find more Pokémon players to hang out with? Find a Pokémon TCG league near you!

Jess Searcy is the publisher of Macaroni Kid South Birmingham, Ala.